BLASPHEMY  IN  POP  CULTURE By http://prieststuff.blogspot.com

The Catechism of the Catholic Church describes blasphemy as follows:

Blasphemy consists in uttering against God - inwardly or outwardly - words of hatred, reproach, or defiance; in speaking ill of God; in failing in respect toward him in one's speech; in misusing God's name. St. James condemns those "who blaspheme that honorable name [of Jesus] by which you are called."

The prohibition of blasphemy extends to language against Christ's Church, the saints, and sacred things. It is also blasphemous to make use of God's name to cover up criminal practices, to reduce peoples to servitude, to torture persons or put them to death. The misuse of God's name to commit a crime can provoke others to repudiate religion.

Blasphemy is contrary to the respect due God and his holy name. It is in itself a grave sin. (CCC 2148)

Nowadays, pop culture has been using religious imagery to the point of blasphemy. For instance, many Catholics reacted when they saw Beyonce at the BET Awards in 2009 singing her version of "Ave Maria" (definitely not about the Blessed Virgin Mary) and "In the arms of an Angel". She was dressed in a white garment as if a first communicant; and then started singing the real "Ave Maria" which is a song dedicated to Our Lady. She wore a skirt made of see-through lace with flamboyant ruffles and a big slit in front revealing much of her body. She was practically singing half-naked.   Beyonce's  good performance was ruined by her borderline blasphemy.


Reuters reported that in a sold-out stadium just a mile from Vatican City, lapsed-Catholic Madonna wore a fake crown of thorns as she was raised on a glittery cross during the Rome stop of her worldwide ‘Confessions Tour’ in 2006. Cheering lulled at Stadio Olimpico when she was raised on the cross and some of the 70,000 fans from predominantly Roman Catholic Italy confessed their disappointment. The crucifixion was unnecessary and provocative. What was her point? Clearly, she just wanted to be the "talk of the town". She wanted to stir up the emotion of the Catholics. She wanted sensationalism. How can this be entertaining when many are offended? 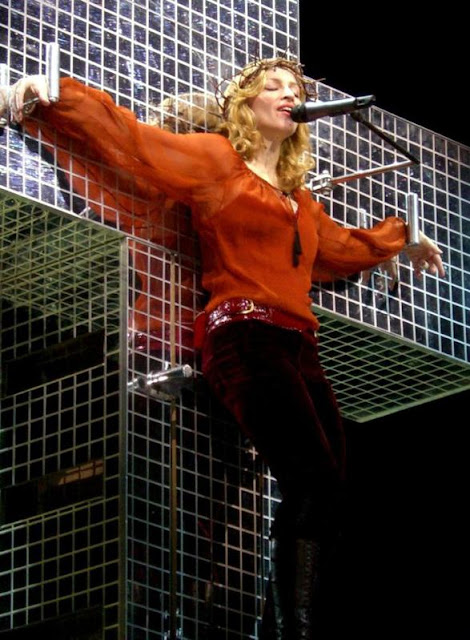 St. Thomas Aquinas said:
“It is clear that blasphemy, which is a sin committed directly against God, is more grave than murder, which is a sin against one's neighbor. … it is called the most grievous sin, for as much as it makes every sin more grievous.” (Summa Theologica 2:2, q. 13.) 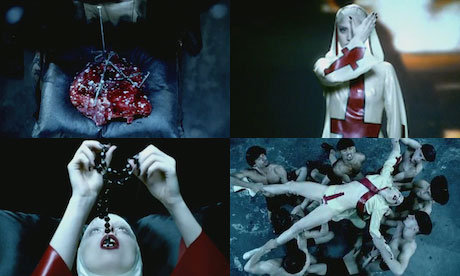 In Lady Gaga's "Alejandro" music video, there is certainly an argument that any offense taken by the Catholic Church may be warranted, given the conflagration of imagery including (clockwise from top left):

2. Gaga dressed as some kind of crusader;

3. Gaga's crusaders raised her above head height to wear an inverted cross at the crouch level. It was a depiction of some sort of rape scene;

4. GAga dressed as a red-rubber nun and swallowing a rosary-like material, which is not only irreligious, but also a possible choking hazard. 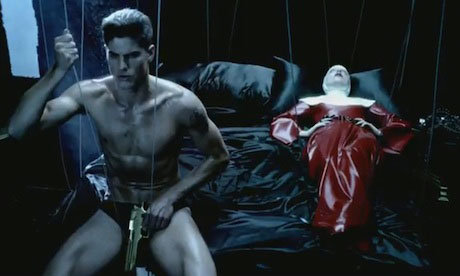 In 2011, Lady GAga'$ music video "JUDAS" offended many Catholics again. She played the role of Mary Magdalene in this very confusing video. The names of the apostles were printed at the back of the jackets of persons riding motorcycles while Gaga herself joined an imagery of Jesus (as symbolized by the crown of thorns) in a riding tandem. There was also an imagery of baptism of some sort. Obviously, she wanted to sustain her sensationalism.

Furthermore, Gaga is fond of wearing her version of a nun's habit. This is utterly unacceptable. 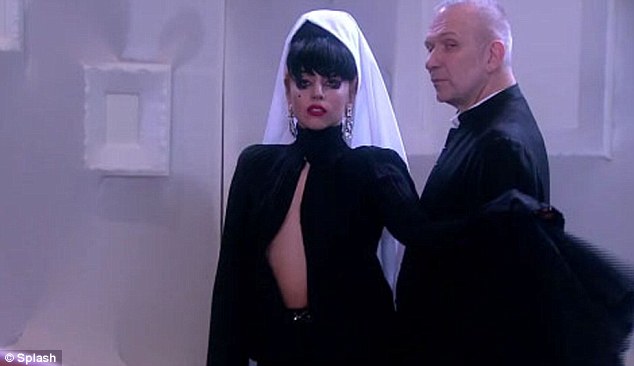 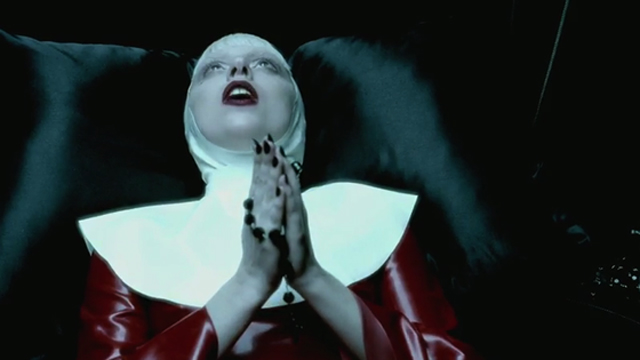 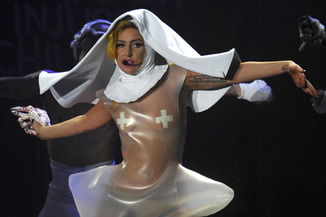 The latest to join the list was Nicki Minaj who wore the worst dress at the Grammy's in 2012. She was wearing a habit-like, little-red-riding-hood-like wardrobe and entered with somebody who portrayed as the Pope. 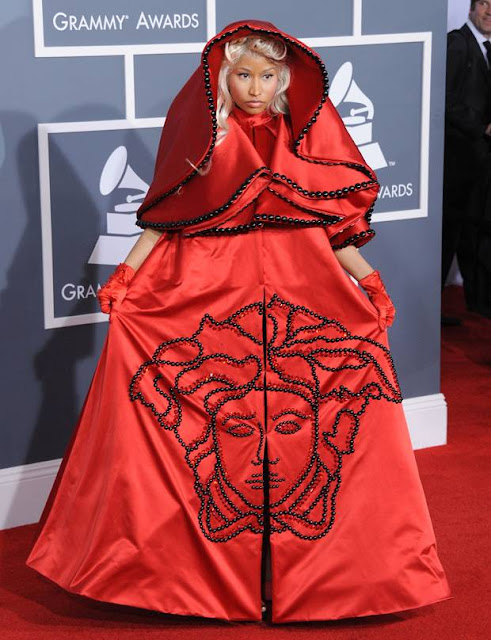 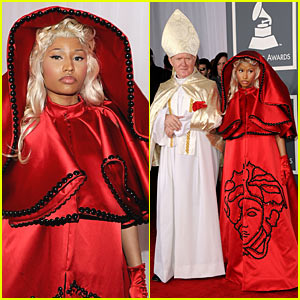 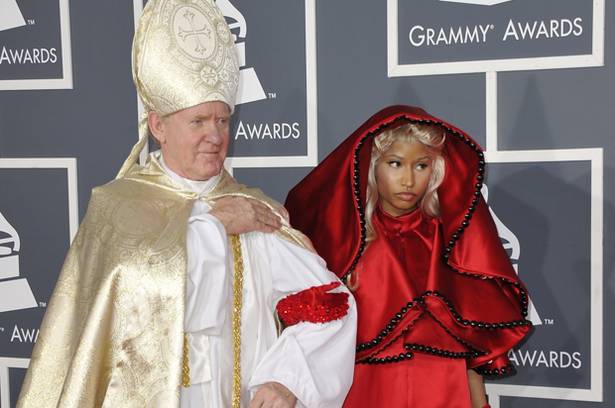 Furthermore, Nicki Minaj played around with the Sacrament of Reconciliation, Exorcism and the song "O come all ye faithful" on her live performance at the same event. Perhaps, the most vulgar was the sexual statement that showed a scantily clad female dancer stretching backwards while an altar boy knelt between her legs in prayer.


We first learn respect from our family, the ecclesia domestica. It is rooted in love. There is an old saying that goes "Treat others as you would have them treat you". Everyone deserves respect.

Katy Perry on one of her tweets said "Using blasphemy as entertainment is as cheap as a comedian telling a fart joke." Artists must focus on their talent and creativity. They must learn respect. Their ways must really show who they are as persons. Respect is gained by persons who know respect.

YOU MUST PRAY FOR THEIR SOULS, AS THEY HAVE SOLD THEM
Jesus' message from The Book of Truth, Thursday, August 29th, 2013 – www.thewarningsecondcoming.com
My dearly beloved daughter, those of you who pray My Crusade Prayers diligently, know that I bring relief to the world from the snares of the devil.
The old serpent falls and stumbles losing much power when you strive to say My Crusade Prayers, daily. And while the times of great trials continue, your prayers will create many setbacks in the plans created by Masonic powers in the world, which are designed to create havoc in order to control the weak and vulnerable. Just one Crusade Prayer, said from the heart, is enough for Me to destroy the power of arrogant political leaders, who do not have a conscience.
Egoism is a curse and a liability to mankind’s ability to live in harmony and peace. The obsession with personal ambition brings nothing but division, as man strives to dominate those he feels he needs to, in order to gain much.
Those of you who follow, blindly, the orders of those in positions of power, who direct you into committing acts, which you know are abhorrent in the Eyes of God, then you, too, will be found as guilty as those who tempt you to carry out such wickedness. The men and women, whose power over others has been created because of corrupt acts and other means, will have much work to do, if they wish to enjoy My Glorious Kingdom.
I will fell the egotists and proud amongst you. I will throw you onto the ground, until you become as humble as those you trample upon.
I will cut out the hearts of those hardened and stubborn souls who care nothing for anyone’s needs, except their own. They will be taught that if they cannot love, then they shall not have it. Instead of love, they seek only idolization. These poor souls who have been elevated before you in the world, in every form, are victims of Satan. Instead of applauding their boastfulness and accepting their insatiable need for public adoration, you must pray for their souls as many have sold them.
Many souls in positions of influence over others, including those in politics, the world of music, the media, the entertainment business and those in high finance, are to be held in your hearts, as many have become slaves to themselves and their needs, which serve only their own lusts and desires. They infest the innocent, who emulate them and copy their lifestyles, which have separated them from God.
I, Jesus, condemn the world of false idols created by those who want nothing but power, wealth and the ability to influence others.
The spread of atheism has been caused by man’s pride in his own ability. It has been caused by man’s belief that mortal man, because of the Gift of human intelligence, has all the answers to the true meaning of your life on Earth.
Young souls have been lost to Me because they idolize false idols in the form of worldly goods, fashion, music and the world of entertainment. It isn’t that they must not enjoy life – because this brings Me happiness – it is their lack of love for Me and their own bodies which grieve Me. They were born pure and perfect. Their bodies are a Gift from Heaven. They desecrate their bodies and have no shame in performing obscene acts in order to draw innocent souls towards them. Many of those with such power have sold their souls for their diabolically inspired gifts. The only reason they were given these gifts was to provide pleasure to the world, as a talent given to them by God. But, Satan tempted many and promised them, in return for their souls, a glorious and glittering life of wealth, adulation, fame and pleasure.  When they received these gifts, they then used them to infest other souls. And so, it continues, until millions of other souls become slaves to Satan. Many souls who follow false idols become drawn to drug addiction. They have no shame, no modesty nor real love for each other, as each tries to vie for the greatest attention.
So much time is spent in the battle for self-glory, which is caused by an obsessive love of themselves, that God plays no role at all in their lives. Many of them reject God openly through the desecration of the Holy Crucifix – so little shame do they have. Know that they would suffer a terrible fate, were I not to intervene. These are just one group of lost souls, which I will garner and then provide them with the Gift of salvation, because of your prayers My beloved followers. I will take them through this special prayer, into My Refuge.
Crusade Prayer (117) For those who have sold their souls

Dearest Jesus, I consecrate the souls of (list them here) and all those who swapped their souls for the price of fame.
Rid them of their infestation. Turn them away from the threat of the Illuminati, who devour them.
Give them the courage to walk away from this wicked bondage without fear. Take them into Your Arms of Mercy and nurture them back to a State of Grace, so they are fit to stand before You.
By Your Divinity, help me through this prayer, for Satan’s adopted souls, to prise them away from Masonry. Free them from the shackles which bind them and which result in a terrible torture in the chambers of Hell.
Help them, through the suffering of chosen souls, through my prayers and through Your Mercy, to be in the front line, ready to enter the Gates of the New Era of Peace – the New Paradise. I beg You to release them from captivity.
Amen.
Your Jesus